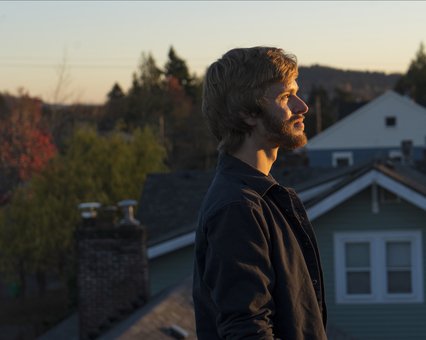 Kennebec is the project of American musician and composer Eric Phillips. He announced the release of the debut album. Departure is out on February 14th, 2020 via Night Time Stories. According to the press release, Kennebec’s producing of ‘Departure’ began in Spring 2017. It took two long years of patient, daily labour to complete the album, during which time influences such as Studio Ghibli soundtrack composer Joe Hisaishi, cult hip hop artist Nujabes as well as Australia’s Taylor Crawford and Tycho’s ambient electronica began to permeate the soundworld.

He scored parts for classical guitar, ngoni, kalimba, bass, piano and Rhodes all of which he plays himself on ‘Departure’. Phillips began writing violin and viola parts for friend and collaborator Mirabai Peart (Joanna Newsom, Alela Diane, Ryan Francesconi), whose balkan inflections and beautiful tone became a defining sound of the record — and eventually tied the album together. All tracks on the album were mixed by Phillips.
On ‘Departure’, organic beats and soaring string lines envelope the listener with a dreamful kind of optimism. New single ‘Seasons Change’ is a silky myriad of sounds, textures and techniques that melt against a backdrop of subtle electronics, while ‘Kalahari’ glistens with curiosity and adventure as magnetic strings meet with a mosaic of horns. Elsewhere, the melancholic and wistful moods of ‘Wellspring’ provide a moment of reflection before the warm, fuzzy, feel good grooves of ‘Quest’, embellished by flutes and sax, venture into more overt atmospherics and fluid modulations.
“Recording ‘Departure’ was an amazing learning experience for me as a producer, composer and musician. It was a concentrated period of time in my life that was fully dedicated to focusing in on my craft. To me, the songs sound like journal entries — they bring me back to those specific times and places, but I also write music in an active, intentional way to try and summon the better parts of myself day to day to come to life and fruition. I have to be doing something new and experimenting to be inspired musically and I also wanted the music to be evocative of that sense of discovery in an almost physical sense —  a sense of journey, motion and exploration of new spaces. The passing of time, setting out,” says Phillips.
He adds, “I wanted to make something bold and ambitious that sounded fresh and different. I think I took a big swing with this album, and, while I feel it’s impossible to fully nail the vision and intention, I’m really proud of it and the sense of idealism, even if naive at times. Hopefully it’s just fun to listen to someone take a big swing like that.”

We already shared “Seasons Change”; “Abundance/In The Reeds” is a new excerpt. Listen below.