The London trio – Harry McVeigh, Charles Cave and Jack Lawrence-Brown – is back with a new work largely self-produced, three years after the last one Big TV (2013). Friends was released on October 7th and it was anticipated by four singles: “Take It Out On Me“, “Come On“, “Morning In LA“, “Hold Back Your Love“. The band has achieved commercial success with the first album “To lose my life…” and the next two works (2011 and 2013) had a good response from public and critics but not as much as the first (certified gold) especially regarding sales.

The sound of Friends carries on the road taken coherently by the band album after album, with a post-punk, new wave style that hit again but this time with more electronic elements.

Since early records, the soul of the band has always been influenced by bands like Joy Division and Editors but the last album adds more pop-electronic elements starting from the first two tracks “Take It Out on Me“ and “Morning in LA” anthem-romantic pop songs that may turn up early-days fan noses for the too commercial structure but they are two of the most exciting tracks. Characteristics that you can also find in the eighth track “Come on“.

For sure, this work will make you dance! “Friends” is not an unanimous wall of sound but it’s rich of different music elements in a steady experimentation and contradiction. The band has not drop out of the classic White Lies sound but they had decide to fly over it. About this Harry said: “there are a few classic White Lies moments but also a few tracks which might be a little bit more unexpected. I love the variety on the record, it was such fun to make“. The influence of the past and the will to move on: “We’ve all grown up a great deal I think. The album actually deals with a lot of the emotions associated with the changing of relationships with friends and family as you grow up and move on to new things”.

This is a work about love, about personal growth and the third track “Hold back your love” witnessed this growth: “Collectively, as a band, I’d say this is probably the song we all love the most on the record. Lyrically, musically, emotionally, I feel it is one of our most advanced and successful attempts at writing a song that feels quite timeless – despite it’s clear nods to 80’s pop”.

The fourth track “Don’t want to feel it all” closes the first part of the work with a return to the past. An energetic song reversing a classical paradigm starting downs and coming up to punk sound “Before collapsing back in on itself. The song that pushes White Lies traditional palette of sounds furthest, with the use in the chorus of what can only really be described as digital steel drums”

We can divide the album into three parts: first to fourth track, fifth track and from sixth to last track.

The fifth track splits the work moving away from the texture of the album looking for a musical experimentation. This track is a surprise, “it’s 6 minutes of disco, full of programmed bass, and heavily delayed drum fills”. The track with more electronic elements of the album that lead the listener directly to the rockest track of the album, in search of a contradiction in a constant surprise, again. To reinforce this contrast in the sixth track there is the DX-7 piano and the synth guitar in the verse, supplanted by roaring rock guitars in the chorus. Gut feelings come with “Swing“, with a suffered lyrics, it is the most emotional song of the record.

The album closes with the ballad “Don’t fall“. It is not a classic ballad, is a White Lies ballad: “This song rounds off the album in a fairlylow-key manner, and hopefully leaves the listener wanting more”.

Someone considered this work as a transition album for the band. There are those who talked about inconsistency and some people considered it a success.

Try to listen to this album without external influences, without thinking about what the White Lies have produced or what they could produce. This album is solid, coherent, exciting, makes you dance, makes you smile, makes you dream and thinks about love and life. A music energy that overwhelms you and makes you want to listen it over and over again. 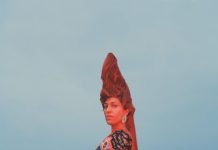